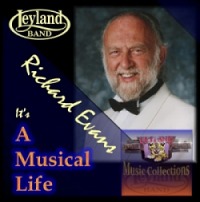 As Musical Director Emeritus of Leyland Band, it was both a joy and an honour to work with the players on this exciting CD. To perform such a great variety of music which brought back so many good memories and also explored the wonderful talents of our soloists.

There was a rather poignant moment when John Doyle recorded the trumpet solo ‘People’. A few members in the band remembered Maurice Murphy’s offering on his CD ‘The Lighter Side of Maurice Murphy’, which our band accompanied. I’m sure Maurice would have approved of John’s fine playing here. Then we spent time working on the very fast, and technically difficult ‘Salterello’ from Mendelssohn’s Italian Symphony, in an arrangement dating back to the early part of the last century by William Halliwell, the famous brass band conductor. We had a little fun with ‘Beethoven’s Beano’, Howard Snell’s tongue in cheek mickey take, with our Principal Trombone player, Danny Brooks, lengthening the solo line in the famous tune ‘Fue Elise’. Leyland Band have a good relationship with the young composer Paul Lovatt-Cooper and the CD ends with his Salvation Army inspired ‘Vitae Aeternum’. To you all, please enjoy this collection of our music, we certainly enjoyed recording it.